A trio for 4th July

By no means a complete waste of time yesterday. I had a small Trixie on yesterday’s selections, (as shown on the slip), and cashed out after the first two came home.

This relatively new offering from many bookmakers of a cash-out on multi-bets doesn’t often make financial sense, but in the case of a Trixie when you have two out of three legs up, it does. Many of you will get it, but for those who don’t, let me just outline my probably poor maths and even weaker thinking.  We had a 2/1 [A] and a 7/4 [B] winner in a Trixie, with a third leg at 8/11 [C] to come.  Had all three horses won, we would have had three Doubles (AB, AB, BC) and a Treble (ABC). That would have generated*   18.18 pts for the doubles and 14.25 pts for the treble. With the first two producing a winning double, my guaranteed return was 8.25 pts including stake. I took 21.5 pts including my stake. Given that Listen to the Wind drifted like a badly moored barge, from 8/11 to 5/4only mad me think I had made the right decision. As my old broker used to say, “Stop complaining. Nobody ever got poor taking a profit.”

That’s it, lessons over – so onto today. I have selected three rank outsiders to celebrate Independence Day – one of which was actually born there –  and I also give you this small, idealised, Hollywood tribute to the American spirit. 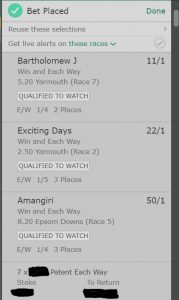 Later on the same card in the lucky last, BARTHOLOMEW J will be hoping to take this Hands n Heels races for the second year running. It’ll be a tough ask, but 11/1 (¼ odds 2 places) encourages me slightly to have a pop. Finally, Poppy Bridgwater will be trying to coax a run out of AMANGIRI in the 8:20 at Epsom. He is an arse when loading, but a little bird has told me they have cracked it. 50/1 is way too big.

I have done the three in a ½pt e/w Patent for 7 pts total.

*Raceweb will often talk about a “point” stake, in some cases that might be £1, in others, it might be $100. It’s meant to be fun, so losses must not impact on your life in ANY way. Each to their own.

PrevPreviousThree Tips for 3rd July Tips
NextMoving swiftly on, or not in some casesNext