A wet end to the Flat season 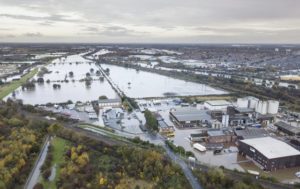 A rotten way to end the season, but for the people of Donny, no racing is an irrelevance. Having been flooded once before, I can only tell you, that the hackneyed phrase, emotionally scarred, does not do post-flood sentiments justice. I wish them all the very best of luck and please God, the fact that it is an election year, might prompt some greater help for the victims than is often the norm.

Being hardy and Northern, they will in the main not whine about their rotten luck. This does not apply to jockey Danny Brock, who believes it is unfair that a rubber band wrapped around the striking end of his whip should cause him to be fined and banned for marking his horse. I’m not certain whether the BHA has such a clause within their licencing purview, but any licenced person or organisation, who brings the sport into disrepute should lose their licence. A simple definition of that legal phrase, (bringing something, or someone into disrepute) is to do something that causes people to not trust or respect something or someone. We are facing a crisis of confidence in equine safety and management at the moment, driven by ill-informed and self-righteous bias; and all the hard work that Richard Phillips and others are doing to prove to the public that racehorses are cared for better than most family pets is instantly undone by Brock and his defence. (“It was there by accident”)

Meanwhile, there is some racing and it is decent jumping action in what I suspect is good soft ground.

DUNHALLOW GESTURE e/w – MIDNIGHT REFERENDUM (spotted in April running well after a wind- op) – DEPUTY’S OSCAR seems the wrong price at 12s. I don’t like DANSE HALLOW who I think will find the ground not good enough

If there are eight runners, have a look at JACKS LAST HOPE e/w. Otherwise ROSY WORLD

I have a sneaking fancy for Grand Sancy, but not enough to back him against the favourite, who is thought to have shown more improvement on the gallops. No bet.