Caesar Salad – how difficult can it be?

At my working lunch in Farnham today, (mentioned elsewhere), I chose from The Castle Inn’s menu, a Chicken Caesar Salad. It was described as being a Classic Chicken Caesar salad: crispy cos lettuce, rustic garlic croutons, Parmesan, soft boiled egg, anchovies, Caesar dressing. I asked our waitress to remove the anchovies, which are a step too far, but she pointed out that they pre-existed in the dressing, which in these modern times is OK – I suppose. However, when they are merely draped around the dish, I simply find them too salty on their own and a digression from the parmesan. I was also surprised to see lumps of bacon in the dish. As my old Muslim nanny used to say,”…it makes it hard to swallow even for an old Jew like me!” It doesn’t matter to me, but to some of my friends it does.

The trouble is, that once I become a bit scratchy, I start thinking. I started thinking about the word Classic, and then added the word to Chicken! “Whoa!” I thought. There isn’t any chicken in Cesar Cardini’s recipe invented in Tijuana in 1924. (Yes folks its a Mexican dish!).

According to Wikipedia, the Caesar salad, (also spelled Cesar and Cesare), is a green salad of romaine lettuce and croutons dressed in lemon juice (or lime juice), olive oil, egg, Worcestershire sauce, anchovies, garlic, Dijon mustard, Parmesan cheese, and black pepper. In its original form, this salad was prepared and served at the table from a Gueridon trolly. You rarely see it now, but for over 50 years, many restaurants offered Guesrifdon or Russian Service. The service involved some flamboyant chef, Maitre d’ or waiter, preparing dishes such as salads, steak tartare, steak Diane, or perhaps a flambeed dessert. A gueridon was simply a trolley that has been altered to carry out its function as a kitchen extension. 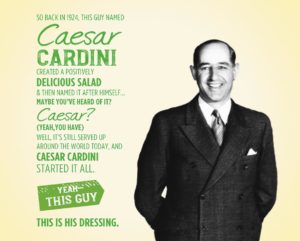 So, dear old Caesar Cardini, an Italian immigrant, was living in San Diego but also working in Tijuana, largely to get over prohibition. On the 4th July 1924, he suffered a rush of customers, at his restaurant, at the Hotel Cesar. His food supplies were low, so Cardini created from what he had, the Caesar Salad, adding the dramatic flair of the table-side tossing “by the chef.” Everyone said they invented it including his brother Alex, but the original did not contain pieces of anchovy – the slight anchovy flavour coming from the Worcestershire sauce. Cardini was opposed to using anchovies in his salad. Suffice it to say that Rosa’s 2003 obituary in The Telegraph is well worth a read HERE and the Guardian ran an excellent article on creating the best version HERE.

Caesar Listed (Not Quite Classic) Salad

If you want a Chicken Caesar salad, then is what I suggest you do is. Roast a whole chicken whose interior contains one lemon, cut in half and a head of garlic also cut in half. The lemon and garlic will help season and keep the bird moist. Over the top of the bird lay strips of streaky bacon and remove from the bird once they are crispy. Once cool, remove the two breasts and shred. The rest of the meat is excellent for rice dishes, sarnies, other salads.