Did Cheltenham week sound an alarm for you?

If I’m honest, the first couple of days of Cheltenham were spent in a state of bewilderment. Despite God and Government, we were alive although marooned, blamed, alone, vaccinated, yet still incapable of sharing a glass, and throughout it all, still watching some superb racing performances. Racing TV covered the races in a professional, engaging and informative manner. ITV covered the majority of the races, entirely in line with their GMB policies; so jolly, unrelentingly woke, cliched, “our thoughts…” “tragic times…” and with Ed Chamberlain increasingly interchangeable with the generic presenting style of Alex “Backstabber” Beresford.

The next couple of days were spent in an increasingly bewildered state because we all know the parameters under which racing fans enjoy their sport. We know that we can get it all wrong; we understand the concepts of odds and percentages and risk management;  of course, we don’t always spot the handicap ringer, and, yes, we ignore the voice of reason that says every horse jumping a fence isn’t guaranteed to see the other side. Yet, for some reason, what we witnessed at Cheltenham over four days and 28 races, seemed puzzling, and after a while, it just seemed relentless and unbalanced.

I suspect bewilderment is what the survivors of all massacres feel.

At its simplest, there were 23 Irish-trained winners of the 28 races – despite the visitors fielding only 40% of the runners over the four days. Twenty of the winners were bred in Ireland. There were 10 Irish trainers with winners for 20 owners. 13 Irish jockeys rode winners. But wait, there’s more. There were more Irish Mares who won than there were British-trained winners, and a single jockey, (Rachel Blackmore), rode more winners in total than all those trained in the UK. And consider – if Envoi Allen had remained standing, it would have been worse!

There had been plenty of warnings in recent years, of what GB’s National Hunt future might hold. We all knew individually what the problems were, and yet when it was all bought together under the brilliant long-term leadership of HRI’s Brian Kavanagh, we were surprised. What Brian had done – and all the signs were there for us to make patronising comments about – was to climb onto a Class 6 nag 20 years ago. After much training and guidance and cajoling, he will climb out of the saddle in September of a Group One global racing authority, an all-encompassing racing machine that has restored a bloodstock industry to excellent health and financial well-being. Brian had previously been both financial controller and chief executive of the Turf Club, and he’d managed the Curragh racecourse. He is the chairman of the European Pattern Committee, and he has constructed an industry that has encouraged a lot of international investment in the product, and he will be sorely missed. The BK model has also encouraged the other Irish equestrian sports bodies to follow suit so that the Irish Horse thrives, delivering jobs, employment, income, foreign investment, and taxation across the Republic. (A country, incidentally, where the Government does not regard the horse with suspicion and does not believe that racing is somehow the spawn of a cruel Satan intent on sapping the Nation’s moral fibre).

So that is the first part of the British problem. Not the fact that we don’t have a Brian Kavanagh – we don’t, but the fact that it has taken him some ten or fifteen years to achieve this level of supremacy. The reason for that – if we’re just focussing on the National Hunt industry, is that the effective age range of a National Hunt Graded Cheltenham winner is 4-10.

The other issues which I assume are the subject of discussion with the various groups are:

Bloodstock sales: I have no idea what the breakdown is, but it appears that the leading National Hunt bloodstock sales in the UK consist in large part of Irish-bred horses. Additionally, the best horses, i.e. the most expensive, are going to Ireland. (Alan King believes it might be as much as 80%)

Early years Development: The Irish have now got a well-developed nursery system, where they are bringing them on for the Point to Points, which have effectively become career trials. As Charlie Brooks reported some two years ago in The Telegraph (HERE), we have actually been hindering that development stream, because Colonel Tufty-Bufty has some issues with the right-sort people being involved in Pointing, or maybe it was just Sophie Lacey, (who incidentally had SKY PIRATE and ENERGUMENIE go through her talented hands). But that again is a huge over-simplification, because of course, Mr and Mrs Lacey have to live and money talks… and in Ireland, they have the buyers who are prepared to spend the money. (See Bloodstock)

Prize Money: Again, the point above is over-simplified because the perfect economic circle that is Irish National Hunt racing, means that it is now attracting big investment from British owners, who are having their horses trained in Ireland. This is not a recognition of Irish training brilliance so much, as the fact that the prize money is so much better. British racing is funded in part by a Levy on horserace betting turnover, unlike Ireland, where the Government makes a direct contribution to the industry of around £60m a year. HRI are not dependent on the bookmakers’ whim, so HRI can have less racing and more prize money. I think the ratio between GB and Irish NH race meetings is something like 7/2.

Competition: Are the best meeting the best. Do we need a better trials system, perhaps a two-day trials meeting in early February? Perhaps at Warwick or Kelso? Is race planning getting it wrong? How many times in these articles have we seen G1 and G2 five-runner races, and what’s the point? They don’t do anything to help betting turnover and, therefore, the Levy. They are surely a sign of too much racing?

Of course, it’s not just about the big Championship races and the G1 and G2 Novices – the handicaps also feature and of course, the Irish gave us a spanking there as well. There were several performance surprises and I had backed all the losers. But that isn’t the point. A friend of mine in the heart of racing sent me the following data table, which shows the correlations of Winners to Runners for both GB and Ireland since 2010. 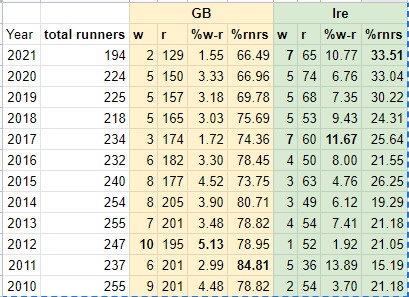 The extraordinary fact that leaps from the table is that, despite Irish protestations about unfair handicapping, the Irish wins to runs percentage has been better for the last 6 years than Britain’s best in the whole 12-year period (5.13%) which was set in 2012. There’s clearly a pattern developing. From his perspective as a handicapper, the punter who doesn’t follow Irish form as closely as the British form is massively disadvantaged because the Irish are statistically twice as likely to win a Cheltenham handicap than their British rivals.

Either we all start following the Irish form much more closely, or we find a better way to correlate it with the British form because, on the evidence of that table, it makes no sense to bet in those races. I have even heard it suggested this week, that the bookies might consider introducing markets like ‘without Irish runners’ or vice versa.

So, are we capable of reorganising ourselves? Are we capable of separating ourselves from the bookmakers? Can we get the Government on board – perhaps reminding them that is effectively a part of the farming industry? Can we remove the obstacles to rethinking National Hunt racing and remind the Flat purists that we are all equal above and below The Turf and even the Tapeta? Time will tell, but next year, just back Irish.