Some years ago, I was introduced to Sam Hoskins who had just launched Hot to Trot, a racing syndicate which, in name at least, had all the potential of becoming a hotbed of syndicated lust. What actually transpired, was that a number of my chums secretly took up Sam’s offer to hotly trot and added to the frisson by having various Group successes. Simultaneously, as memory faintly serves, The Turf Club started banging in winners. The cumulative effect was a stream of chums politely enquiring, with some depth of patronising smugness, whether I had backed the 66/1 winner – which of course was available on The Tote at 200-1 and on Betfair at Squillions. The answer, (as ever), was No I hadn’t, but what I did tell anyone who would listen, is that I considered Sam to potentially be a great and good force in racing.

His patience, humour, common sense, and work ethic, all recommend him for anything he does, but I noticed today that the Racehorse Owners Association (ROA) Board elections have opened. Can I suggest – if you are a ROA member – that you keep Sam on the ROA board by voting for him?  Apart from anything else, he will maintain healthy support for the development of the syndicate ownership schemes, which in the coming financial storm, racing might well come to rely on. I have absolutely no axe to grind on this subject, but both Sam and Simon Double, who is also standing for election again, are good for racing. You could do worse than phone Fitzdares and see if they’ll give you 50/1 about Sam becoming Senior Steward before 2035.

Meanwhile, my week has been full of amusing incidents, with – and I know you’ll find this screamingly funny – the paint drying quicker in the west-wing library than it did in the third-floor guest suite. The dog did the cutest thing ever, by barking for her supper when we forgot to feed her because we were watching the paint dry. I know, amazing. We have also been experimenting with wonderful recipes for mince, suffering from freezer-burn. I have no idea about the nutritional values remaining after exposure, but adding flavour combos of chilli, golden syrup and goats cheese didn’t really work. Much like Chris Packham telling me about Primates on TV then. 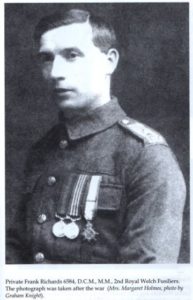 The other bright light has been the arrival of a recommendation from our literary correspondent, High Rise, for Old Soldiers Never Die by Pte. Frank Richards DMC, MM (Click HERE to read it in a new window)

Phil Carrdice, the BBC’s Welsh expert, blogger and reporter tells me that somewhere around 1933, Richards wrote to his old officer, the poet and author of I Claudius, Robert Graves, asking him for advice on what to do with a memoir he’s been handwriting for over three years. Immediately impressed by what he saw and read, Graves worked on the manuscript and eventually found a home for it with Faber and Faber. It was an immediate success.

I am of the opinion that if both High Rise and Robert Graves recommend it, we will probably not go far wrong.