In the Shires, Tory women are already preparing in their six-oven Agas the cakes and biscuits consumed during the hustings, as Rishi and whoever turns up for the triannual Tory leadership elections. They and their cohorts will promise to deliver whatever is perceived as locally vital and promise to be either more woke or more right, and then they’ll be gone. In their wake, many earnest kitchen table chats will explore the salient points of the candidates’ political merits over the crumbs of the lemon-drizzle cake. “I thought he was lovely”, “You wonder where he made all his money”, “I thought she’d have nicer skin”, “She seems taller on telly.” Thus the party faithful will discuss the vital issues and decide on the next U.K. leader. None of this would be possible without the Aga.

Today, all hope I had of playing any part in this vital decision-making process was removed – along with the inherited Lambourn Aga. The chosen ones will get no sustenance from my always-on gas power station as the candidates pass by on their case-pleading journey. A man who stood about 5′ square and could lift the Aga’s innards one-handed arrived at 8:00 am, having travelled all the way down from Cheshire. He would return there with the disassembled brute and several sacks of used vermiculite this very day. Once it has been cleaned and re-enamelled and the gas price has come down, it may well be ready in time for the next Tory hustings – but on historical evidence, probably not.

Someone made the point the other day that Boris had single-handedly bought down three P.M.s; Cameron, May and himself, and that the biggest problem for all Tories – and thus their new leader – was a lack of both party trust and loyalty. Boris had been untrustworthy and disloyal to the two P.M.s before him and was repaid in kind. With one or two possible exceptions, this is already the fate that awaits, for example, Zahawi, Shapps, Sunak, Truss and Javid because the party is riven as always, by not only hugely ambitious and duplicitous egos but also by Brexit. Some of these campaigns had been in preparation since last December (loyalty is vital in Cabinet). Penny Mordaunt never removed her website from her previous run but has at least avoided PM for P.M. However, she failed to spot Oscar Pistorius in some of her background videos, so she lost points. Then there are already little smearing files against Sunak and Zahawi doing the rounds. There are candidates with 20 M.P. supporters who are simply on the prowl for votes in return for patronage. Then there are swathes of ill-educated SPADS with huge dollops of greedy ambition but no worldly knowledge or sense of history, who are helping to raise or destroy a hundred dreams of advancement with a dozen Pistorius-level mistakes. It is in brief, plus ca change, which also means that the Tories remain the focus of European revenge and retribution for the U.K.’s disloyalty to the Federation. I understand this is beginning to play on some money minds – aka Tory funders. Why do these people not understand that if U.K. Plc is skint, then being in hock to the European bank of Bust and Ponzi is truly ludicrous.

So, as my gas bill and Putin’s GDP plummets (plus the internal house temperature is down 15°), I read that Sunday has been the hottest day in Scotland since records began. This suggests St Andrews and the 150th Open Championship could be cloudless, windless and rainless. I would give you about the same odds of that remaining the case as I would for Dominic Cummings not launching his “Anyone But…” campaign against at least two leadership runners.

So who are the real front runners to take the honours – and now I’m talking Golf. We’ve selected the first three Major winners this year; today, we’re going for the grand slam. So here are my thoughts on The 150th Open Championship.

One of the Go-To sources of all knowledge has to be The Golf Channel, where Cara Banks is the brilliant English presenter with excellent depth of knowledge and enviable communication skills. She is also a visually easier and charming member of my best friend’s family. Anyway, TGC has ranked the Open players in order 1-150, and I am delighted to say they have made life a whole lot easier because they have confirmed some of my wilder thoughts – especially when their ranking and the market price have been disparate. I have shown their rankings beside my tip’s prices, and you can see the article HERE

There is inevitably a vast range of offers. There are 12 places available with Paddy Power – Betfair (same company) – Betway, then all the way down to 7 places and all for 1/5 odds. Remember that the more places that are tied (there is only one winner but often plenty of tied fourths, for example), your stake is reduced; thus, if your player is tied 4th with 3 other players, then your stake is divided by 4. If six players were tied for 8th place and you had backed a player e/w for 8 places, your stake would be divided by 6.

As regards the difference between a ¼ of the odds and a 1/5 odds, the simple fact is that in most cases, the better odds are available for the lower risk. Thus Joaquin Niemann is 55/1 with Bet Victor ¼ odds to 5 places and 40/1 for 12 places 1/5 odds. Finally, remember… if your selection is placed, you lose the winning part of your bet. So £10 e/w at 20/1 for ¼ odds returns a £40 profit. The same bet for 1/5 odds returns a £30 profit, a loss of 25%; that is why in the main, I bet with Betfair Exchange for Golf Bets and then hope to make a profit early or at least partially cash out to get my stake back.

The man who worries me most is Rory McIlroy. On the plus side, he tied for third here in 2010 aged 21 (despite a gob-smacking 80 in Round 2); since he’s had a win and three top 5s in a run of 4 – which excludes the 2015 renewal when he’d bust an ankle playing footie. On the downside, he did not play in the Scottish Open; if the wind gets up, he could be sunk. Then there is the chance with Rory that he’ll be unable to get his head around The Cock Up. If he makes a mistake, it could easily haunt him for the rest of the round and potentially the rest of the match. 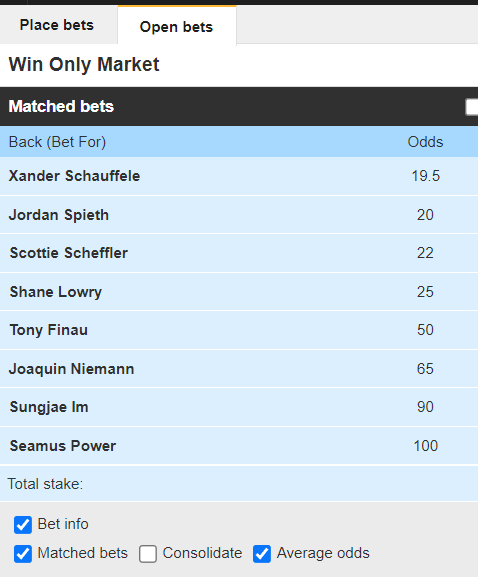 My shortlist of 8 against the field contains very few surprises. If I had to back just two based on perceived value, I guess they would be Tony Finau and Seamus Power

He almost won in 2015, when he finished bogey-par and a spot out of a playoff. He’ll enjoy the conditions, although his putting has been letting him down recently. The Old Course greens are often far slower than the rest of the tour and may provide some relief.

His first open was last year, and had an 8th place finish. Consistency is variable, with an MC in the PGA followed by a 2nd slot in The US Open. Players who do well in the Masters tend to do the same at St. Andrews.

A relatively recent addition to the tour at the age of 35, the words late developer seem to apply. However some switch has been flipped, and he has

These three just failed to make my selection list – do not let that put you off.