Laying Trump perhaps, plus a wonderful and informative TV card

My inbox delivered an interesting piece from Politico.com which political punters might find interesting. The article refers to the work of Ms Bitecofer, a political scientist of some repute, Putting aside the fact that at this stage in the USA’s presidential race any fresh political voice is a siren, Ms Bitecofer does appear to make some sense.  Clicking on this LINK will take you there, and it is worth reading, as she suggests that Trump will not, nay cannot, win a second term, for a variety of quite plausible reasons.

Over the last few days, I have been experimenting with a new concept (for me) which is essentially a means to share, easily and simply, other journalists’ articles relating to the Cheltenham Festival which have caught my eye. It might fill an idle moment on a train, and I hope it will be of interest. Keep the link handy, or add it to your browser favourites, as it will be updated daily, so there will always be something fresh on there – including some already valuable insights from the likes of Lydia Hislop and Alan Lee. You can get there by clicking this link, which will open up my Cheltenham NHF magazine, on Flipboard, in a separate window.

The Daily Mail broke a story on Friday, which said that the Tote will announce next week, as part of a new marketing initiative, their intention to guarantee that Tote win dividends will at least match starting-price returns. I’m pretty certain that the only way this can work, is if they lower the returns on longer-price winners. Historically anything winning at 12/1+ has paid bigger on the Tote 66% of the time – often by considerably more. Surely if you know you can get SP on The Tote and half a point bigger on Betfair or Betdaq, by looking at a mobile screen, you’re going to bet online at the course. I’m not sure what the attraction will be, but I hope it works, as racing needs pool betting and to own it. However, I beg the Tote not to fiddle with the other returns and more importantly to start getting creative. Pay 5 places on 20 runners or more. Create a Saturday guaranteed million-pound bet for a pound on eight races with eight or more runners competing. Pay a place dividend, by allowing punters to go each-way. It’s not difficult, the maths stack up, what’s not to like?

Meanwhile, we have the Denman Chase and a host of races which will guide our path towards mid-March and they are:-

Dan Skelton’s ANYTIME WILL DO was a close fifth here in November, just behind ONE FOR THE TEAM, VIVE LE ROI, & DOLPHIN SQUARE. Theoretically, (for such is the nature of handicapping), he is handicapped to reverse the form but, I think the ground is actually more likely to make the difference, as his two previous wins were on good ground.  AINCHEA went off favourite at Cheltenham LTO, but frankly should be chasing and simply looks clumsy over hurdles. Patently the market thinks ACEY MILAN will come good today, having been backed from 11/2 yesterday to 5/2 as I write – but I think he is best on soft ground. For me, I’m backing ANYTIME WILL DO e/w and hoping to pick up 8s. The forecast might come from DOLPHIN SQUARE

TORPILLO hasn’t been seen since finishing fourth in the Henry VIII and has been aimed for this prior to a crack at The Arkle. He’s been freshened up, race-weariness being the reason for his defeat LTO, and TORPILLO will be alongside front-runners the Irish raider DJINGLE and MOONLIGHTER. TORPILLO was impressive here in a Novice Chase two starts ago, beating Mr Kingfisher and Lisp by 3 lengths, both winners since.  The real danger, of course, will be NUBE NEGRA from Dan Skelton’s yard. He has improved with each Chase start and was 2nd in the aforementioned King Henry VIII (pulling well clear of the third) and the likely pace and the ground will both suit. TORPILLO e/w

Can someone please explain in words of one syllable, why racing cannot simply call this, and myriad other “Registered As” races, The XYZ sponsored by Whoever  (or even Whoever & Whatever). It’s a Grade 2 FFS, give it a little gravitas and respect. Sorry, as I was saying…..

… and the history of this great race includes, for example, Altior who won this in ’17 & ’18 and went onto win The Arkle, and the Champion Chase, that same year. So can he do it a third time? The headlines generated by the bad-tempered spat between the children passing themselves off as middle-management at the BHA and one of our most respected trainers, simply added to the intrigue surrounding ALTIOR’s chances. He had won 19 in a row and the record ended after he was beaten by Cyrname in November, and Nicky’s decision not to run him at Ascot was greeted with the howls of the ill-informed and the its-only-a-horse lobby. I would love him to win – but as you all by now know, I’d rather watch it admiration and honest delight than back a 2/5 on chance with real money. Instead, I am going to recommend each way on DYNAMITE DOLLARS at around 14s. He’s won three Graded novice races last season before injury prevented him appearing in the Festivals. He gets himself fit, having won first time out for the last two years and he looks value.

Back CODED MESSAGE as quickly as you can before the value goes. His trainer is on fire, the horse is weighted very fairly and he’s super value at all prices down to 9/2. 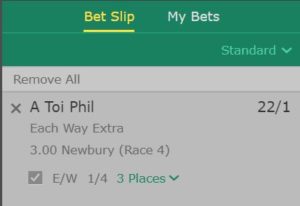 Like Altior earlier, its a third-time opportunity for the owners to pay the training fees for the next year with NATIVE RIVER. He is favourite, he wins on trends, there really isn’t another horse I can make a case for. I am friends with a number of MIGHT BITE’s owners and so I tread here with caution. To me, he looks like a horse who, for whatever reason, now hates the game and he’s gone in the head. We’ve all had them and sometimes one should just put the shutters up –  or perhaps he could have been sent cubbing back in the autumn and hunted over the winter. I suspect it’s too late now, and older, wiser heads than mine have decided what’s best. I note that Gary Moore is very highly rated on Carrington’s TrainerTrends, and I have a soft spot for A TOI PHIL on whom I shall have a tiny punt with Bet365 who will give me a quarter of the odds for 22/1 for 3 places. No brainer.

Wide-open and cases can be made for at least four of these. However, digging at the facts with my trusty entrenching tool, (allegedly owned by the late Lord Redesdale), I notice that BELAMI DES PICTONS is wearing first-time cheek-pieces – but his trainer is 0/11 since 2017, so no thanks. There is no value left now in the other first-time headgear wearer, KING OF REALMS. He was 11/1 yesterday afternoon and is now only 4s. I would have had him e/w at down to eights maybe, but not now. Instead, I’m suggesting an e/w punt on Philip Hobbs’ GALA BALL who is also wearing first-time cheek-pieces. He won well at Wincanton last month, and some might remember his winning the Doom Bar at Newbury last season. He’s only gone up 2lbs and he looks both consistent and progressive – despite his age!

Two packs of darts please landlord. I’m rather hoping that by now we have sufficient profit to have a bash at three or four of these…. or more.

Let’s start with NEFF for Gary Moore, who has taken well to hurdling and who meets the majority of the trends. This is a much tougher task than he’s faced before, but at 40/1 I’m hopeful. Next, I fancy the progressive THEBANNERKINGREBEL, who has won three of his five hurdling starts and it could so easily have been five from five, including being badly hampered LTO in a G2 at Haydock. I keep looking at ECCO for Paul Nicholls, who has been backed from 25s to 16s and is helped by Bryony Frost. I then want to choose one from MAGIC DANCER, QUOI DE NEUFand MACK THE MAN. It’s tricky, but based on the jockey booking I’m supporting MACK THE MAN, whose form has a very solid feel about it and he is carrying no weight to speak of given the later successes of some of his beaten rivals. All e/w.

Later in the Bumper, consider a pop at ADRIMEL of whom I hear good things.

PrevPreviousGood Moaning, here is the good news and the end of civilisation
NextSometimes despair is an underrated word.Next