Pizzas In, Eyes Down, it’s a proper weekend of sport on the box 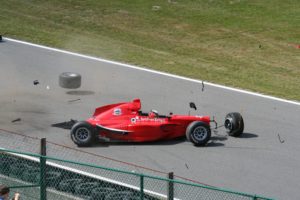 I have got to take some time out from my near-constant dismay at the car-crash that passes for nuanced debate these days. It’s just a stream of liberal, Woke, virtue-signalling, prurient guff that a small minority with little education and less common-sense, tirelessly promulgates in the name of change. Instead, I shall heave the shutters down and spend the weekend watching a fab selection of televised sport, cocking a deaf ‘un to the Marxist demands for me to share the last of the Petrus with a prat who thinks its a greek vegan dish.

It’s going to be damned tricky getting the timetable right. The Derby, The Oaks, The Eclipse, the Austrian Grand Prix, The Indy Car Indianapolis Grand Prix, tons of footy, PGA golf. So much to do, so little time.

Let’s start with The Austrian GP Formula 1 and a brief recap of recent news and brouha. Mercedes, as we all know by now has a typical WWII German industrialist background of slave-labouring and Lewis’ ridiculous support for BLM as a multi-millionaire tax resident of Monaco simply drew global attention to it. Am I alone in remembering a time when the British position was not to bring politics into sport, but rather to bring the ideals of Corinth – fairness and honour above victory or gain – into Politics? Anyway, Mercedes has a new steering system, which uses the steering wheel to alter the front tyres vertical alignment, enhancing the profile, grip, wear, aerodynamics etc and overall making the car about 0.000025% faster. In Formula 1 that is apparently the equivalent of an extra week per lap at Nurburgring. On Friday or Saturday, at least one F1 team will formally object to the FIA, on the grounds that it is a fundamental change to the use and original purpose of the steering wheel. The FIA will hold an enquiry, but ask Mercedes not to introduce the car on the Austrian GP grid. Mercedes will do what they’re told because they are Germans. There is also a chance that not just toys, but cars and teams might well come out of the pram; possibly even tragically, like Williams, pulling out of F1 altogether. We should watch it all this weekend because the politics, finance and sheer chicanery involved are the gripping covers of a global best-seller. If the new Mercedes car starts, Bottas wins, (Toto might punish Lewis for being PR-stupid), otherwise, Red Bull and Max Verstappen will take this having made a huge number of Red Bull changes since Australia. You can get 13/2 as I write about Bottas and at 1/5 odds for 3 places, that’s a very fair punt. The reason for the longer-than-expected odds, is I suspect contained in the words above.

In Golf, this is the second time The Rocket Mortgage Classic has been run, and the first was won by Nate Lashley. The parent company, Quicken Loans are, I suspect, Detroit-based and they also sponsor Rickie Fowler. It’s not a great quality field but includes a few quality players. It’s being played at The Detroit Golf Club, which was established in 1899, originally designed by Donald Ross and which has been prepared for this event since 2014.  A Par 72 of 7,340 yards, , it’s a pretty, classic, tree-lined course with uneven fairways and tricky green complexities. I like the look of Tyrell Hatton at around 16/1,  and Kevin Na at around 40s. On the stats, the course should suit Tyrell, who ranks 2nd in Strokes Gained: Putting; 1st in Strokes Gained: Tee to Green; and 1st in Strokes Gained: Total. He’ll have to keep his cool – he can get a little cross with himself – he could look value by Sunday night. Na is coming off a fifth-place finish at the Travelers last week and his playstyle should be suited to this course, as he has a solid iron game, is a short hitter and a good putter and Na checks those boxes. With many of the PGAs bigger names taking a break this weekend, Na is in with a chance at decent odds.

Independence Day wouldn’t be American without some USA sport, and nothing is more American, after football and basketball than Indycar and NASCAR motorsports. NASCAR looks like souped-up saloon car racing (stock cars), and Indycar looks more like a hybrid F1 car – except all the car chassis are the same and there is a choice of just two engines. For American fans the impossible has happened – the top series in IndyCar and NASCAR will race at the same track on the same weekend for the first time this Fourth of July weekend at Indianapolis Motor Speedway. That is huge and for them terribly important. IndyCar’s GMR Grand Prix, delayed from May by COVID-19, will be run on the 2.439-mile, 14-turn road course at noon on Saturday, July 4. NASCAR’s Xfinity series will compete on the road course at 3 p.m. Saturday. The NASCAR Cup Series race – officially the Big Machine Hand Sanitizer 400 Powered by Big Machine Records, but commonly referred to as the Brickyard 400 – is set for 4 p.m. Sunday, July 5, its originally scheduled date. It’s behind closed doors, but the GP is being televised on Sky Sports F1. If you’ve never seen it taking five minutes out and watch. I’m saying nothing. I have this between Scott Dixon and Simon Pagenaud.

I shall do the horseracing in my next post when the weather forecast is more certain. At the moment, my man at the met says light showers but warns they could become heavy. Nothing to unbalance a horse more than the bottom of Tattenham Corner with a heavy shower ten minutes before.  Later ‘Gator, as we say pre-independence day.