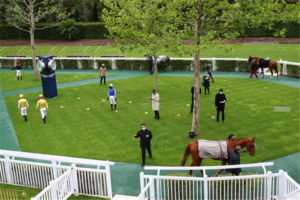 What Ho, tout le monde et Bienvenue to racing “in absentia” from Longchamp. Like a Shakespearian speech, the racing was sans crowds, sans le picnic, sans hacks (well there were five in fact, but that was the entire interested world’s press), sans alcool, even sans owners. Pretty well sans everything. That includes, in my case, sans winners as I had what I thought was a little cheeky double on Victor Ludorum and Sottsass. Neither won and to be honest, I found myself not really caring.

It is now two months and a day since I last had an interest in an English horserace and almost as long as that for a punt – apart from my ludicrous attempt to engage in Swedish Trotting or Harness Racin. If the Baby Jesus were to stop me in the street and ask me do I honestly miss it, I would have to say “Not much, old fruit.”

My weltschmerz has been further tempered by various industry spokesmen, describing the H&S future of UK racing. Paul Struthers, (head of the PJA) suggested there might be as many as two officials tasking with legging-up the jockeys – which also suggests that the boys better be in the Parade Ring for The Stewards Cup or Wokingham a couple of hours early. No Saunas, no showers, ferocious testing, and stepped-down at the first hint of a throat tickle. No owners, reduced press corps, no crowds, no gatemen, no tote, no, no, no, no….

Does that spell the end of my love affair with the nags? Will I ever wager again? Don’t be ridiculous…. lockdown has introduced me to the world of competitive charity quizzing and a rather feeble attempt at online backgammon.

This latter failed, largely because the organiser of the world global on-line lockdown Backgammon World Tourney, Symington-Ford- Smythe, (no, not those ones, these are the Sussex ones), suggested the best system was apparently Apple-based and I am an Android-man. I did play on some other web-based platform and it became apparent that 2,000 AI sharks had fallen into this particular pond and were waiting for Boydy to pop his toe in the water. Should you be tempted, do NOT play against strangers online, even if they call themselves Beatrice, and their Avatar suggests they have the allure of all men’s dreams.

I sort of knew about the world of quizzes, but I had no idea that there are vast websites running charitable events with various entry fee levels, and where the organiser whips out, say, 20%; the charity gets 50% and the balance is distributed as prize money. My first sortie cost £3 to enter, there were only ten players; the organiser had the good sense and charm to come last and, having joined late and missed two rounds, I came ninth. The winner scooped £5.25, which seemed weak in a ten runner race and suggested an earning rate of about £4.50 an hour. This is patently insufficient in secondary income terms. However, I’m playing in the local hunt’s quiz on Friday and I am confident that I could be in the running for the matching tea towels, or better, in return for my £5 entry. Only time will tell if this is my future.

PrevPreviousGood eggs need your support.
NextFinally. A proper Sunday and a chance to catch up on some news.Next