The denuded antepost list and how to pull Elle Macpherson

Endless numbers of “stars” and “celebrity doctors” keep insisting that for me to be well, I must be happy. For me to be happy I must… and there then follows on TV, a horrific list of things one must buy, achieve or obtain, depending on the time of day. Much of it appears to have to do with incontinence, climbing upstairs or eating well. Nowhere does it mention the idea that Uncle Bryn and High Definition should be running in The Derby, and thus saving my ante-post list. I know I am unhappy at this and certainly, my bank manager is less happy than he was when High Definition was a 20/1 ticket. I almost feel sick.

Similarly, I watched a programme about the pre-Covid 19 anti-vaxxers campaign in The USA, and there was the struck-off and widely disgraced Andrew Wakefield (Mr MMR) making an absolute fortune from selling pills and potions in the world’s stupidest country to the world’s most gullible people (I am talking generically – I’ve met several very clever yanks). He’s also ended up living with Elle Macpherson! Crikey – and Lumme!

Because Pandemic equals Vaccine equals Gold Mine to these hucksters and charlatans, there is now a very real risk in the USA that they will not achieve herd immunity, because people are stupid enough to believe this tosh. And here’s the rub. Whilst I might have friends who are Jewish, Left-Footers, Prods, or Agno, it has no bearing on my life. It’s merely, and rarely, a dinner party topic. Having the occasional Vegan for supper, (perhaps with some Chianti and a few Fava beans), is merely a small inconvenience as I temporarily adapt my life to meet their well-being. Remainers and Leavers co-exist at my table, because that is a simple sign of friendship and hospitality, and entirely in keeping with the concept of Breaking Bread together.

However, where do you stand on entertaining someone who is against getting a Covid 19 jab on pseudo-scientific, moral, religious, class, or ethnic grounds? Kate Mulvey’s article in The Telegraph (HERE), suggests we will soon be asking friends who have not been vaccinated to stay away.

Almost in a similar vein, my mantelpiece now runs the risk of having no invites at all. As my body tries to embrace more of the chapel in me than the temple, I can perhaps sense potential hosts feeling obliged to prepare some rare plants crisped in Sparkling water for dinner – and swerving that aggravation, by not inviting me at all! Let me give them all (both) this assurance. Invite Away. I’ll eat and drink with the best of them and longer and harder than the other guests too. I am thrice blessed as I have had C19 AND both jabs. I could wash the feet of the afflicted for a month, and never be touched again by the hand of C19 or any of its greek-lettered variants.

By the by, are we at Omicron yet? Is Omicron better or worse than Delta – or even Iota? If I get the Iota variant will I give a jot?

Fret not for my diet, because should I sense a surfeit of Mr K.Cal on Sunday evening, I shall simply drink vegetable soup on Monday through the week. On this note, a well-wisher from North Wales recently sent me his dietary advice based on eating homemade Ratatouille with Oats either cold or hot, depending on whim. He eats this twice daily and then eats and drinks normally in the evening. Apparently, there is no noticeable change – but he feels better! I suspect being struck off and living with Elle McPherson might be a preferable alternative.

Talking of activities likely to lead to weight loss in the wallet, here are the tips for Epsom Day One. 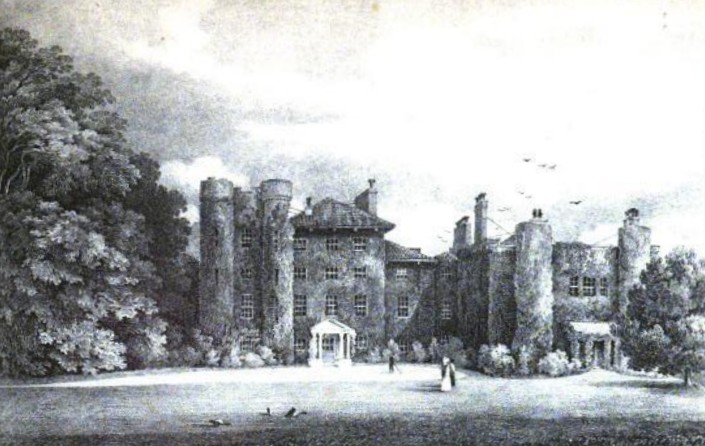 According to Prosser’s Select Illustrations of the County of Surrey (1828), The Oaks was a house “… pleasantly situated on Banstead Downs, in the parish of Woodmanston; the healthiness and convenience of the situation for the enjoyment of field sports, attracted the notice of a society of gentlemen called The Hunter’s Club, to whom the land was leased by Mr Lambert, whence it was long known as ‘Lambert’s Oaks’. They built a small house, designed for the festive meetings and general convenience of the society to partake of the diversions of the chase. Various changes were made to the house over time and eventually it was owned by Gen. Burgoyne who then sold it to his nephew, Edward Stanley-Smith, 12th Earl of Derby.

To celebrate his imminent marriage to Lady Elizabeth ‘Betty’ Hamilton, sister to Douglas Hamilton, 8th Duke of Hamilton, the Earl of Derby held a Fête Champêtre at The Oaks on 9 June 1774. For this elaborate alfresco entertainment, a magnificent temporary pavilion, designed by Robert Adam, was built in the grounds. The picture here is an inside view of part of this temporary structure showing the supper room and part of the ballroom, designed by Robert Adam.

Sadly, all that is left of The Oaks today is the stable block and a few signboards, but the name of the house and its owner are commemorated in a sport that the Earl of Derby was passionate about – horse racing. A plaque on one of the walls of the stables that still stand reads:

In 1779, whilst at dinner with the Duke of Richmond and Sir Charles Bunbury, Lord Stanley, 12th Earl of Derby, named a new horse race – The Oaks – after the house that once stood here. In 1780 another race – The Derby – was conceived. The Oaks was demolished in 1950 after war damage.

DAIRERIN won her Ripon debut and was beaten a nose by a Hannon smartie at Newbury in a decent time. The third in that race, Shibli has won since. FLAMING RIB was third on his Nottingham debut having been impeded and then ended up running left. He won well at Nottingham but again ducked left. It’s hard not to like OSCULA, who looks well-bred and is trained by wunderkind George Boughey. She won well 2nd time out and is one of five who meets a ten-year profile of winners being at least Raceform 91+. She also does well on speed figures. SIENNA BONNIE ran in a York Listed LTO and was 4l 7th. Patently she has shown something at home and she just might get placed for decent money. BUT all 26 fillies to have contested the last 20 runnings have been beaten and only three have been placed. Having mentioned Hannon, his RAGING is one of only three to meet the trends and I already fancy one of those.

MURAAD heads the weights, but I’d need to see something more than an average Goodwood win over a furlong more, back in April. IRISH ADMIRAL produced a super 10f performance in 3rd place at York LTO, having given the front two something of an early start. There was 2½l between them and they had pulled something approaching 4l clear of the others. He’s only been given a pound for that and the handicapper has made a mistake.It is fair to say that the Simon Dow-trained CORAZON ESPINADO likes Epsom. Eight runs here have produced three wins and three places, including a 1-2-3 over the distance. The draw might be an issue, but between the connections, they will know just how to handle that and the likely pace.

Let’s deal with AL AASY first. A good horse.  He can get worked up – especially now there is a crowd back on course – and he’s got the No 1 draw – the worst draw over 12f at Epsom. He’s yet to win a Group 1 and is against previous G1 winners and I’m uncertain about the ground for him. If he was 3/1, I might have a punt, but 10/11 is way too short. Ballydoyle’s JAPAN is top-rated and his full brother, MOGUL is only 1lb shy and frankly offers better value. I have always had a sneaking regard for PYLEDRIVER who won the King Edward VII and the Voltigeur last year. Any rain and he’s nailed on for a place.

SKY DEFENDER won this last year off a 5lb lower mark and he was 2nd in April to VICTORY CHIME in the City & Suburban over C&D. BLUE CUP had some bad luck in that race, but showed nothing at York LTO having got lit up. He needs some maturing and favouritism seems a bit strong – even with Oisin onboard and a first-time hood. Mark Johnston’s other runner DREAM WITH ME is no gift from the market makers, knowing MJ’s penchant for harvesting the Epsom June handicaps, 90R – 7W – 7P – over 15 years. (As an aside Sylvester Kirk and SC Williams are much more profitable). STRAIT OF HORMUZ is one of my favourites but I think the ground is now going against him. I’m bound to say that DATA PROTECTION does look value, and going back over the form, he looked as though he might win LTO before being collared close home. He’s only 2lb shy of his last winning mark and 10s seems a decent price.

What do The Trends say:

On those trends, DUBAI FOUNTAIN – SNOWFALL – TEONA and ZEYAADAH make the cut. SNOWFALL won the Musidora, and gets Frankie. TEONA was third in that race and the gallops watchers on the Heath have had her in their sights for some time. She’s wearing a first-time hood and might well win, but I’ll wait to see her price before the off; I think/hope she might drift. If she gets to 15/2 she will be attractive. DUBAI FOUNTAIN won The Cheshire Oaks with ZEYAADAH in second. Rewatching the race, it’s clear that the second got into the wrong place, but once clear started to motor and could easily overturn the form with DUBAI FOUNTAIN and, more importantly, could win this. I’m just uncertain as to whether this is a “look-see” for 12f, when she is considered by Roger a very likely 10f winner. In either event, she will win decent Group races. Finally and unattached to the trends, almost everyone I’ve spoken to has added SAVE A FOREST e/w at the end of their chat. He is widely fancied for a place and I’ll be surprised if he keeps his current 40/1. Finally, SANTA BARBARA ran well on debut at the Curragh before her 4th in the 1000 Gns. That’s her form in a nutshell, and her price is entirely based on her breeding as far as I can see. Too short.

There is a small stat here which I think using which is that of the nine runners in the last 11 years to have raced in a G1 LTO, 4 won and 2 were placed. MYSTERY SMILES is now a non-runner leaving MEHMENTO who ran in the French Guineas. He was also a close second in The Greenham and he has talent and ability.

ARIGATO is back down to a winning mark and is race fit. I’d have him to win, but for the draw and I think you can forget his last Epsom run when he was kept too far off the pace. RHOSCOLYN might turn out to be a cheap buy at £25k and he has almost paid his training fees this year and another wedge won’t go amiss.