I am appalled. The French, it turns out, sleep 5 minutes longer than us, and work a full hour less. They also do less care and voluntary work, but spend 20 minutes extra on shopping and housework. How do I know this? Thanks entirely to this wonderful chart, which also possibly explains why Les Grenouilles regard both our personal hygiene and our eating habits with some suspicion. 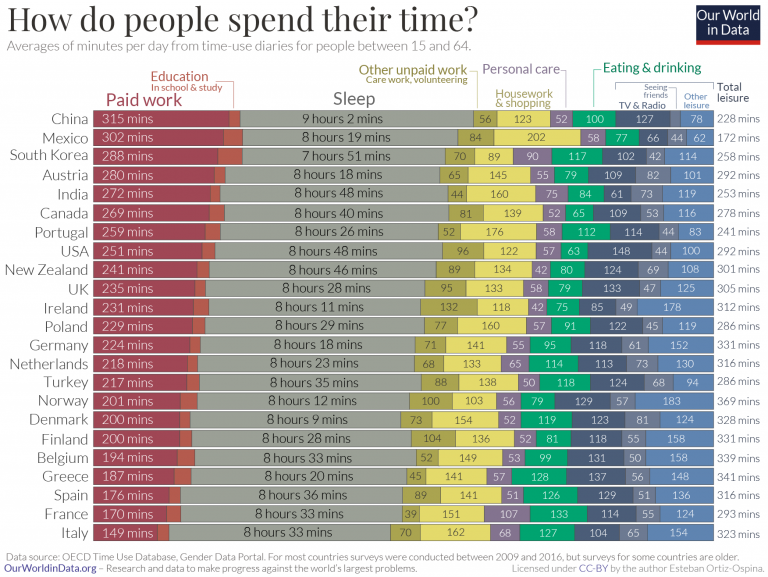 Sadly, however on this chart, I can find no mention of horseracing, although I remember with some fondness a titled member of the French Jockey Club, who chain-smoked throughout dinner, and who, in a very gravelly French voice, described his day thus.

“Once I have risen, I take Frou Frou, my small white poodle, to the Rolls and put her on her cushion on the front seat. We then drive to my favourite PMU and cafe, where I buy Paris Turf and have breakfast, some coffee and a croissant perhaps, and read the form. I then make my bets, and listen to the commentary and perhaps have something to eat. Sometimes, we might go to one of the tracks, sometimes I stay and I talk to my friends about the racing. Then I come back to my apartment and hope my girlfriend has remembered to cook dinner.”

“Crikey” I said, “that sounds quite fun.”

“Oh no”, The Prince replied, “sometimes I have to sign some papers as well.”

Life can be tough, and for Charlie Mann, that robbing nose bob right on the line of the Cross Country must have been a total bastard. It was made worse because the winner flogged his horse home in the last furlong, picking up 11 days and £400. How exactly, in the current Woke climate, can a horse (and owners, trainers, jockeys and stable staff with their divisions of the prize monies) keep the race if it has been abused. If I smacked my child in public, on the grounds that it would improve the little monster’s public performance, it simply wouldn’t be acceptable at law. (Obviously at Greyfriars it is a completely different matter, and best left to Flashman and the rest of the Pups).  Never mind Charlie, it was a fabulous performance that promises a super international banks career.

I think that’s enough virtue signalling, because luckily, I had also tipped the winner.

Talking of having to continue working for a living, here are the tips for Saturday’s TV racing

The trends are slightly out of whack, because of the impact on the race of Paul Nicholls, who has won it five times since 2009. COOLE CODY won the Paddy Power in November but has only picked up 6lb for his 4l victory. At 10/1 he’s solid value, but I wouldn’t back him at less than 8s. I suspect they won’t let him have such an easy time out front, and it is historically a very rare double, for a reason. However, AL DANCER was third in the race and he now has a 6lb advantage – BUT he looks as though he’ll go off favourite which is not a good thing in this race. I quite fancy ROMAIN DE SENAM who was with Paul Nicholls last year. He is slowly coming to hand for the Skeltons and looked capable at Aintree in a 2m handicap last month, coming fourth. Stepping up in distance and with a tongue strap his price seems to big, but I would be very concerned if we got too much overnight rain. If I’m to have a Paul Nicholl’s horse I think it had better be SOUTHFIELD STONE who looks leniently handicapped off 145 and is way too  big at anything over 16s. (20/1 in places). He won’t want it boggy.

OFALLTHEGINJOINTS has looked decent so far this year and I’m hoping that he still has some undiscovered reserves for this next step up. If he doesn’t carry his burden, then HURRICANE HARVEY is next best.

ASHTOWN LAD is the favourite in a competitive little race and has looked progressive to date. His handicap debut at Uttoxeter LTO saw him step up in distance and the market is suggesting he has the beating of ASK A HONEY BEE. They have met before, but hard as I look, I see nothing really between them. The step-up in distance will definitely suit Fergal O’Brien’s charge and he is a sensible price. His nearest rival was described by Paul Nicholls as looking “fragile”, and in my mind that makes DANNY KIRWAN a swerve. I am always fearful of a long-price Rebecca Curtis animal and PATS FANCY catches the eye at around 16/1. He is probably 6lbs shy on paper – but he looked like he had more to offer at Ffos Las on what was a sensible debut.

There are four other animals here for prize money, but the bulk of it will go to MONMIRAL. However he is a very short price, the ground is by no means certain so I suggest you go and make a sandwich.

On trends I have it between two – and neither is GOSHEN. (Whisper his name, it is a siren call to great riches… apparently). I imagine, much like the entire Moore family, that we are all heartily sick and tired of revisiting Unseated at The Festival. I have a recurring nightmare that the makers of The Crown are developing a six-part series called SHOE, the story of a simple Farrier who broke the hearts of a nation, snatching defeat from Triumph, retrained as a virologist, invented the Pandemic Cure-All, and became ennobled. (Hey that’s an accurate portrayal compared to The Crown’s storyline!). The short version is GOSHEN last season looked a real potential superstar and remains so, but this is the first time he has run against older, more experienced horses and some of these are very good too. SILVER STREAK was third in the 2019 Champion Hurdle and has been lightly campaigned this season, arriving here after being carried out by a loose horse in the Fighting Fifth. He’d prefer ground with the word Good in it, so there is a negative for him. Probably the least exposed and on my shortlist of two is SONG FOR SOMEONE who is 6/12 and won the G2 Coral Hurdle LTO by 5l at Ascot. The second in that race was CALL ME LORD – who won this race last year. CH’TIBELLO was third here last year and won the G3 Randox at The Festival, and is now better off by 10lbs which the Skeltons will take full advantage of. My other trends horse is the ex-Willie Mullins-trained STORMY IRELAND, who Nicholls took on and discovered that as a Chaser, she can be a bit sketchy at her jumps. Back hurdling the dual G3 winner will handle the ground and is possibly good for a place at decent odds.

I really don’t like any of these much, as I can make an argument against most of them. Using my favourite pin and based purely on age, the difference between their last winning weight and today’s burden, the name of the trainer, headgear and the temperature of my coffee, I suggest dutching:

GIVE ME A COPPER – ROCKY’S TREASURE – SKIPTHECUDDLES for 3 pts

The BAY BIRCH has been backed steadily and is now 3lbs better than her last winning mark. 12s is a decent price for a mare who has shown ability over these obstacles.