A day full of mixed emotions. The exam results bode well for young Theocrates with two A* and an A. Does this get him into the Maths department of his Uni of choice? Of course not – he is white and middle class and the place must go to someone with lesser grades who has been unfairly marked down in life and who will benefit from the type of crass Millenial social engineering that James Cleverly (who is positioning himself for the next leadership election) supports. Instead, Theocrates must go to some giant super-campus where they think a Nobel Prize is an Oscar given to Meghan Markel.

Listen, I hear them scream – Minorities with issues must be given the leg up. Hmmm. What other sciences might be applied to the problems of people being born unequal or with issues? Eugenics? The lunatics have already tried that almost exactly a century ago.

We are, sadly, none of us equal. His background didn’t stop James Cleverly from Lewisham going to Uni. It didn’t stop the 67% of all MPs who went to a comprehensive or state grammar, then having 72% of them going to University. The Sutton report suggested that more than 50% of successful entrepreneurs were Comprehensive educated. The difference between the Haves and The Havenots is acceptance of one’s lack of entitlement, that hard work is required, that the 10,000-hour rule is almost unbreakable, that Reality TV stardom and TikTok moments aren’t careers, and that success is something to be shared by helping others – not by traducing or decrying it.

The Hon bumps into a man who knows about land management on her dawn-patrol dog walk. He tells her all about the changing face of forestry. Quite apart from the threat of Ash Dieback, the UK’s most prominent landowner, the National Trust does not have the resources to manage its woodlands either well or efficiently. The Forestry Commission, which should be in charge, doesn’t have the resources. The tosh spoken about tree planting is a giant smoke and mirrors exercise. The reality is that the forests and woodlands of Blighty are blighted in every sense by a lack of funding, skilled foresters (and lack of specialist skills training), and the collective will to separate centuries of experience from the modern socio-political opinions about countryside management. Of course, some landowners are coppicing their woodlands, chopping out the overgrowth, letting the light in here and there and replanting when needed. But then most of them will be running shooting estates as well. Anyway, that’s what he said – which made the drive to work a bit of a downer. 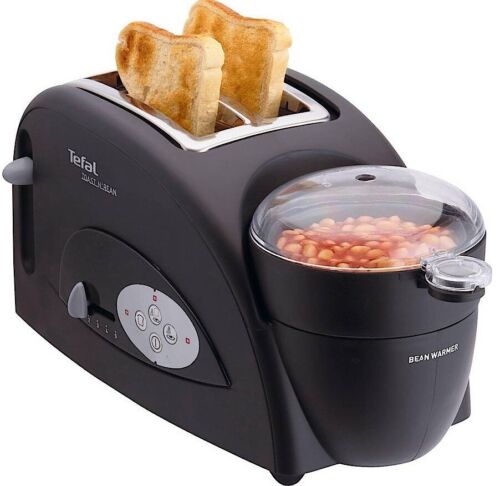 I was cheered however, my very first email of the day which was an ad for the one gadget I never knew I didn’t want. Common sense tells me that if this is a success, it is the end of days. I would not be surprised to hear that something similarly nonsensical was discovered in the ruins of Troy or Pompeii. Thanks to my on-wrist health management programme, I am informed that the production output of this machine is 417 calories with wholemeal or 550 with white bread. That means running (as in jogging and thigh sores), for around 45 minutes to burn it off.

I am such a saddo, I still want one.

Apparently, instead of beans, you could do eggs – boiled or fried, possibly even poached. I can feel my hand moving toward the mouse… Stop.

No hang on – you could do brown shrimp in butter with a little cayenne. What about pieces of Lobster in a hollandaise sauce on toasted muffins? Bugger the running – you could spend a long weekend just working on recipes!

Talking of things you knew were pointless, but somehow you were egged on to have a go, here are the suggestions for Day 3 on the Knavesmire. Thursday was far from a car crash and my fondest best wishes and admiration to Sir Mark and Ms. Rausing for Alpinista’s run. A very decent performance.

The trends reduce the field to seven and with a historical decent strike rate for LTO Ascot runners, you get a field of three  CHARGING THUNDER – ONESMOOTHOPERATOR – ANGEL POWER. Away from the trends, MAHRAJAAN gets first time cheekpieces, having disappointed in the John Smith’s Cup last month and the coming 2nd of 4 LTO at Newmarket. Cheekpieces plus Jim Crowley could both make a difference. I still think he has too much weight to carry. I’m going to dutch the three trend horses which at current odds will be around 9/2 the three.

I suspect a maximum of 2.5mm overnight rain and that TRUESHAN will likely be a non-runner. That being the case take your prices ASAP. Oh yes – STRADIVARIUS has never been beaten at York.

A cracking race with the Richmond Stakes winner ROYAL SCOTSMAN the favourite. Sadly winners of that race rarely win here (0/25) but the 2nd and 3rd have won this three times in the last 11 years. That raises the possibility of CHATEAU reversing the form. Charlie Appleby’s NOBLE STYLE looked decent at HQ LTO. Karl Burke runs MARSHMAN just a week after an 8½l win at Thirsk. If memory serves, I think I fancied him for the Richmond Stakes, but he was drawn having gone lame. The market fancies him, but the price is tight. Sheer greed tempts me toward the 12s currently available for Andrew Balding’s CHATEAU who has a Newbury Listed race over the distamce to his name and now receives 3lb from his Goodwood rival. The step-up in distance helps.

I could pick horses for this all night long, and never find the winner. THE PLATINUM QUEEN is too young and too short – but the booking of Hollie Doyle over Oisin Orr (who can’t make 8st 2lbs might be significant). As might her fantastic speed figures LTO. However this is not a race for 2yos. ROYAL ACLAIM is too short and is spelled incorrectly. EMARAATY ANA is here for the third time and hoping to improve on last year’s second, having also won the Gimcrack previously. He was very exciting last year, but his four races this term have been poor. Don’t be surprised if the drop to 5f wakes him up. He looks too big. I keep waiting for FLOTUS to have a big payday, and the new front-running style might make the difference here. She was 2nd behind G1 Tenebrism,  was a solid third in the Commonwealth Cup this season and won the G3 Summer Stkes here, LTO. If the draw is to play a part, then LAZULI will get revenge for his poor Goodwood draw LTO where he gave weight to everything including the canteen mouse, and was still beaten less than a length into fourth. RAASEL makes you go hmm as does KHAADEM. I think I have mentioned the winner……

YAWCOLEF will improve for the step up in trip, and caught the eye staying on strongly LTO at Goodwood for a 3rd place. The form is very solid as the first, fourth and fifth have all won well since.