You’re not allowed to say boo to the Goose

Editorial Note: No people died from Covid in the writing of this article and the author has recently tested negative – again.

Even as Thor’s Day gets into gear and as the first rounds get underway at Augusta, I shall be back at The Great Western Hospital undergoing what should have happened on Monday, after a dismal weekend on which my vital signs fluctuated like the love life of Elizabeth Taylor. (Do not panic. Just move the gawpers back from the tape, and tell them my old suits are not yet available at Oxfam, Wantage).

For the past week or so, I have felt breathy. This has been the general scenario since I caught Covid 19 over lunch at Boodles in March 2020, and prior to going to Cheltenham, where I and anyone else in the racing industry since 1862, allegedly infected the whole of China. It has impacted my immune system, and my long-Covid experience is mild but tiresome, involving ticker and lung. It is much like the first time as a boy that you see Suspenders and Stockings encasing a female form who isn’t your mother. You can barely breathe and your heart races while you start to lather up. The similarity between that moment and the phrase “being colty” is seamless – but is also frightening if you’re no longer 14.

Anyway, on Saturday having felt breathy, I tried to stop breathing altogether. It was like sleep apnea while encased in jelly, but all while conscious. I spent the day in bed – but on Sunday recovered sufficiently to [a] notice that my leg was bloody sore and [b] have lunch with friends. There I swerved some mackerel, (surely the most overrated thing in the sea), nibbled some lamb, and admired an Apple and Prune cake, a receipt of the inestimable Two Fat Ladies. Our very kind hosts restored me slightly with a brace of stiff gins and some overly-elderflowered glugging Sauvignon both of which gave me some forward motion, but I was unwell in conversation and while I occupied space, it was not my usual jolly room-filler.

So on Monday, I spoke to the GP. In brief, she said the leg wasn’t Cellulitis, which I have had before, but the breathy thing and general lack of condition might be DVT and so sent me to The Great Western for an ultrasound scan, prior to which I would have blood tests, which would reveal whether I was signposted as being a clot. In the following five hours, now lost forever, I had a blood test and a chest x-ray, talked to the same nurse twice, the same doctor twice, explained four times why I was there, why I was being blooded and what should happen next and eventually saw a consultant, who had completely the wrong end of the medical stick and later phoned me to ask me to come back next Thursday for… a scan. ???

The only thing I have to show for my day is a bruised arm and the memory of the nurse who looked like Amy Winehouse. To some men, Amy just looked and sounded like the longest weekend of talented, sexy bliss imaginable, but I am cooler than that, so I merely smiled from behind my face mask – which meant squinting to show you’re smiling with your eyes, which means your glasses move and start to steam, so now you look like you’re having a stroke….. she sort of smiled, and her hips oiled her away towards the defibrillator.

The single biggest issue is that these Emergency Day Ward waiting rooms are little better than airports. They have a huge number of aeroplanes in the air, which they need to land, refuel, and get out so they can land the next one. What they need is an efficient Patient Traffic Control System; what they have is paper – which no one reads. Better technology would help – facial recognition, or simply disposable machine-read RFID tags perhaps. Somewhere there is a doable, improvable and cheaper method, that would result in someone knowing why every patient was there at all.

Incidentally, my new game is to answer the “How much do you drink” question with; “About the same as you”. You can have some interesting conversations about Islam, or the inappropriate confusion of medical beliefs with political ideologues. In one case I had to point out that the cost burden of alcohol on the NHS for the last five years, which had been raised by the self-righteous medical panjandrum, was within 10% over the same period of the financial impact on the NHS of their legal bills for negligence settlements, damages, appeals, court cases and reparations. Life’s a Bastard – and then I arrive to cheer it all up.

The week has started early here at Raceweb Towers, and so I drag my weakened body down to the bridgehead, which is the beginning of our assault on Aintree and Augusta and the Masters. With luck, I shall see you all on Saturday cheering home the winner – and the day after – say goodbye to Charlie Mann and the Racing To Help Ukraine convoy – while saying hello to the Master’s victor.

A couple of stats worth noting.

There are four Par 5s at Augusta. Tournament winners tend to have really good scores on those 4 thus:

One of the biggest tools in the Augusta “pickers” arsenal is the SG-Approach figures (or Strokes Gained: Approach-the-Green).  (Go to the PGA for a full explanation) According to Data Golf, all of the last five winners have been fifth or better in total SG – approach for the week, which also implies (with Augusta’s smaller-than-tour green size) that accuracy is everything. To that end, the five top players in SG-Approach are: Viktor Hovland – Russell Henley – Paul Casey – Daniel Berger – Shane Lowry

Now from those ten players, I think we’re beginning to develop a credible shortlist.

So here is my final list of seven and I have backed the lot for a total of 30 pts e/w for only 4 places at a ¼ odds – but taking the better prices as shown below. I have also dutched them to ensure a price of approx 5/1. If you have a Betfair account then simply back them to win and trade out later. 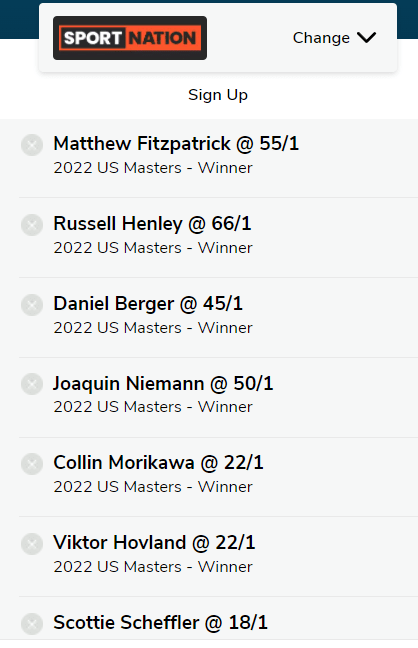 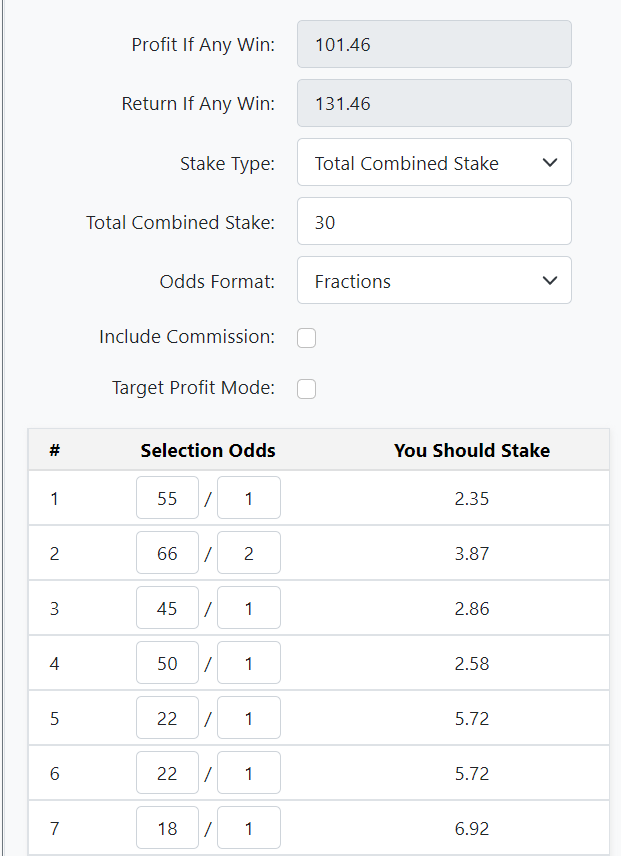 Interesting Fact: 10/11 Winners had run in The Arkle or The Marsh LTO. Strangely that gives us just one – WAR LORD, who was 4th behind Edwardstone. Interesting Fact: 12/12 winners rated 150+. Again and strangely there is only one… PIC D’ORHY. Sadly they’re the first two in the betting. If you were looking for a lively outsider…. there isn’t one.

I’ve heard good things about FAUTINETTE  who is having her first run for Venetia Williams. Good French form, with a suggestion that rain would help. IN THE AIR also has decent French form and won a Newbury Juvenile Hurdle by 4½l in the Soft for Gary Moore and family, without the cheekpieces and tongue-ties he had for his two french races. They remain off. PIED PIPER (3rd in The Triumph) and BRAZIL (winner of The Fred Winter) are the obvious favourites but are no value. However, available at time of writing around 16s, Milton Harris’ KNIGHT SALUTE disappointed in The Triumph failing to jump with his usual fluency and failing to pick up under pressure. That smacked of something amiss and even at 7.75/1 with Bet365 for 5 places, there is money to be made.

The last two winners reappear for a pop at each other, with a “supporting cast” of the Gold Cup 3rd and 5th, The Irish Gold Cup winner and the Ryanair third. With 11/2 on offer with Paddy Power and William Hill, I’m afraid I have to back CLAN DES OBEAUX simply because his unrivalled record in this race, 1st time blinkers and this having been his main target make him e/w value. BACK HIM NOW – THE PRICE WON’T LAST

I’m so tempted by EPATANTE and her 7lb claim that I could probably ignore the stat that tells us that only one Champion Hurdle runner-up has won from 18 attempts. However, Aintree is so unlike Cheltenham that I think she might well be suited to the track. I might have a small forecast on her to beat BREWINUPASTORM and MONMIRAL

EPATANTE 4pts Win – 1 pt SFC with the two above.

Applying those few trends narrows the field down and suggests that JETT should hose it. (Geddit?). However, from that shortlist, I do have a small fancy for LE BREUIL and MARRACUDJA at what seem like attractive prices.

GUNSIGHT RIDGE is the most talked-about horse in the race, possibly because he meets most of anyone’s trends, together with FUGITIF – especially since you’re looking for something carrying less than 11st. The former you might remember was the favourite to beat L’Homme Presse earlier this season when he was getting a whole pound advantage! How we learn. This has been his target I suspect as he skipped The Grand Annual at Cheltenham – 6 of the 7 winners also missed the Festival. He must be ridden with more restraint than was shown last time out, but he is way better than his 134. As I write I can still get 16s about SHAKEM UPARRY who has been talked up by Ben Pauling and DOLOS also looks too big at 14s.

God I hate these races – you crack through the form, the clues are sparse, the ratings are almost meaningless, the trends in this case eliminate nothing, and you’re simply looking for inspiration to unblock the riddle. So I started making my own shortlist, starting with eliminating any horses that hadn’t to date been thought good enough to run in a C1 race. That left me with 8 – though some Irish races are hard to determine. Anyway, I got the fastest NELLS BELLS and an actual Listed winner MALINA JAMILA, who won in December at Huntingdon and was only 5th LTO in another Listed and carrying a penalty – because she doesn’t like the ground to soft. Yes, the top 2 in the market are on that list, ROSY REDRUM and ASHROE DIAMOND, but 28/1 and 66/1 are simply too big to resist…. surely?

PrevPreviousThe eyes have it – the eyes still have it.
NextLumme – What went right there?Next